The training technique could be described as ‘gymnastics meets Olympic lifting’ and has been known to leave people incontinent with exhaustion. So is it for you? 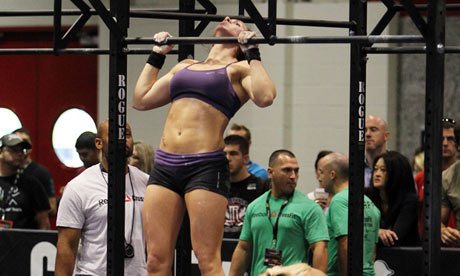 A Crossfit competition in Houston … do you dare try it? Photograph: Josh Hedges/Zuffa LLC/Zuffa LLC via Getty Images

I’ve never been a team player, nor the kind to whoop my way through exercise, but standing here in a huge south London warehouse in London’s newest Crossfit space, I find myself aggressively screaming encouragement at my partner as she completes the final set of our team workout. We met an hour ago, but already I’ve been through a lot with this woman. First a warm up akin to most people’s full workout, then mobility exercises, heavy squats and now this final push. Once we have lain together, heaving, on the floor for a few minutes, we embrace, sharing more sweat than I have ever done with anybody I’m in an actual relationship with. To an onlooker it might look a bit overfriendly, but in the wacky and cultish world of Crossfit, hand-slaps and roars are commonplace.

Perhaps best described as “gymnastics meets Olympic lifting”, Crossfit training involves tough bodyweight manoeuvres. Handstand pressups are a favourite, along with pull ups on the bars or rings. Then there are big, compound lifts – including the ones you never dreamed you could do, such as “snatch” or “clean and jerk” – and plyometric movements, such as the box jump. Other training tools include kettlebells, skipping ropes, medicine balls and rowing machines.

For those of us who wouldn’t dream of doing a single handstand push-up, the organisers are quick to say you don’t have to be an athlete to be welcomed into the community and achieve the sleek and muscular Crossfit physique. Crossfit not only defines itself as “constantly varied, functional movements, done at high intensity” but also “scalable to all levels” (using bands, lighter weights and easier variations of traditional exercises to cater for beginners), so it doesn’t matter if you’re an overweight city worker nursing an injury or an ironman athlete. This training will test your body and mind to its limits.

But, as with anything extreme (not to mention addictive), Crossfit is steeped in controversy. Some declare the inevitable machismo associated with workouts that leave people floor-bound, sometimes vomiting, both ridiculous and unsafe. Controversy hit a peak when women were reported to be “working out so hard they wet themselves”, prompting a debate over whether this was stress urinary incontinence worsened by Crossfit’s intense regime or just the result of a weak pelvic floor completely unrelated to Crossfit and best tackled by other means. There’s some anecdotal evidence, however, that overuse injuries are not uncommon amongst Crossfitters and an unobservant or undertrained coach could cause members more harm than good – for example by promoting heavy lifting over good technique.

Jon Denoris, trainer and founder of bespoke fitness studio Club 51 in London’s Mayfair, agrees that there’s a potential risk with this type of training: “I think people got bored with the ‘machine-driven’ exercise protocols and prefer the tribal – almost cultish – nature of Crossfit,” he says, adding: “I must admit, although I’m all for training hard where appropriate, I’m a little wary of the apparent lack of attention to the detail of programme design within these formats; many Crossfitters take a typically ‘alpha’ competitive approach and so the risk of injury and drop out is (I believe) high.”

When it works, though, it really works, as 32-year-old property developer, Will Midlane, who started training at Crossfit South London when it opened in March, knows: “There’s something unique and inspiring about the power of group energy that I have never seen replicated in any other gym,” he says. “It’s that which keeps me coming back consistently, along with the fast and positive changes to my body composition.”

Perhaps it’s the sense of community that is responsible for the rapidity with which Crossfit has become a global fitness phenomenon. Since Greg Glassman founded it in US in 2000, Crossfit’s popularity has grown exponentially. In the US the number of “boxes” is more than 4,000 and here we’re catching up, with 200-plus “boxes” in Britain and Ireland, more than 60 of them opened in the past year. A full affiliate map can be found at map.crossfit.com.

Like any respected sport, there’s also scope for formal competition. The annual Reebok Crossfit Games is a three-day, single-sport, multi-disciplined competition open to anybody who dares to enter. Since a small crowd of 70 gathered to compete in the first games in 2007, entries have risen every year (as has prize money, now $250,000 for each winner ). Last year 150,000 people entered the Crossfit Open – the initial stage – of which 2,959 were UK athletes. From there, a select few make it through to regionals after which the true elite compete in California, with the winners proclaimed “the fittest alive”.

But all this growth comes at a price, says ex-professional rugby player, Michael Price, owner and founder of Crossfit Blackrock, Crossfit Dublin and Crossfit South London, a recently opened facility and the scene of my sweaty post-workout embrace.

“The fact that Crossfit is growing so quickly means, in some places, it’s moving away from what it stood for – ‘the pursuit of excellence in human movement’ – and becoming more like a group exercise model such as aerobics or spinning. So nowadays, there’s good Crossfit and bad Crossfit. The former is run by professional coaches who know how to programme, how to teach a class step by step and empower clients. The latter can be dangerous and is just about throwing people in there and seeing how they get on.”